The bull market makes us all look like geniuses, but we’re not.

It’s time for a good dose of perspective and honesty.

Scalabrine was sick and tired of hearing average Joes say they could beat him one-on-one on the court. The armchair professionals insisted that Scalabrine, a 3 point per game player, a poor player by NBA standards, would be an easy challenge.

Scalabrine wanted to shut them up. Scalabrine took on four of Boston’s best amateur ballers, dubbed it the “Scallenge” and recorded it for all to see. Some had Division - 1 college experience. All had supreme confidence they would win.

Here is how it went.

The Vanilla Godzilla lambasted every single one. The D-1 guy who played at Syracuse lost to Scalabrine 11-3. The next two average Joes didn’t even score a point on Scalabrine. And the last competitor couldn’t score more than 3 points, too. Once the former NBA player figured out the competition, they didn’t have a chance. In total, Scalabrine scored 44 points to their 6.

For safe measure, Scalabrine finished by facing off against the three radio hosts who were running the Scallenge. Despite being outnumbered 3-to-1, Scalabrine scorched them 11-1.

Why is this story important?

At the end, Brian Scalabrine said something prophetic, “I’m way closer to LeBron James than you are to me.”

All of us, I believe, deep down in the lowest depths of our ego, hope that we can reach the peak, the apex of our field. That desire is to rub shoulders with the best, compete at the highest level AND be considered the best, too.

Let’s face it though. We can’t all be a freak of nature. That just isn’t statistically possible.

There’s a much greater chance, however, we are the average Joes thinking, ignorantly, that we can keep up with the bottom of the barrel of the top 1%, the Brian Scalabrine’s of our field.

The “White Mamba”, as Scalabrine has been nicknamed, was far from the best NBA player. But to play in the NBA for any length of time, one is in an elite group of the best basketball players in the world. The focus of the viewer’s attention fixates on the elite of the elites. Don’t forget: they’re all phenomenal vs the rest of us.

Here is the reality. Investors and entrepreneurs form themselves into the bell curve we see in all areas of human talent, like above. At the left are the bad ones. This group makes up 50% of the human population. This group lacks the skill, genetics, knowledge and “fitness” to do the most basic of task at a manageable, let alone great level. 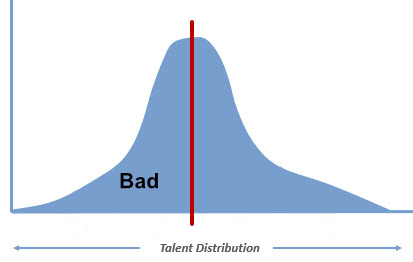 Next to them, is a group which is slightly smaller but still large, roughly 40%. These are the mildly able investors and business operators. They might survive for a short time, or might be lucky enough to look good during boom times, but when the tide turns, they’re history. These are no more than one-hit wonders. 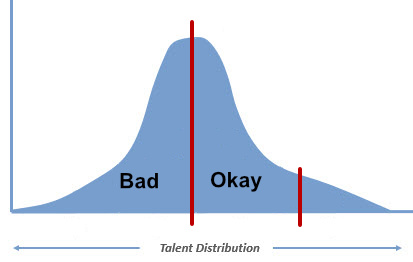 The next level is much smaller. These are the good investors, operators, artists, basketball players and so on. When I say good, they consistently smoke weaker competition and attain above average results. They usually operate in small niches. Generally, these are the people who’ve reached the top of their field with mountains and mountains of work, intelligence and fanaticism. Brian Scalabrine would be at the top of this pack. 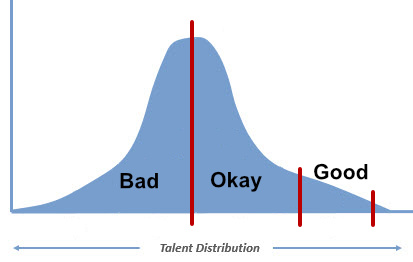 Above them and us all, are the Disney’s, the Walton’s, the Buffett’s, the Malone’s, the Mozart’s, the Jordan’s, the Jackson’s, the Jon Jones’s and the Rockefeller’s. These are the freaks of nature. Divine accidents, gifted at birth and through nurture with talents beyond us mere mortals. Everything comes at least 4 times quicker to them so each stroke of effort multiplies quicker allowing them to dance circles around everyone while we all bash our heads into the wall wondering enviously, “How on earth do they do that?” 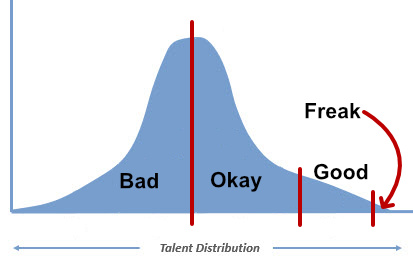 So be honest with yourself first. Where do you fall on the bell curve?

It’s a bull market and heady part of a cycle, so you probably think you can tussle with the Brian Scalabrine’s of investing/business and win. But that’s silly. Those individuals are much, much closer to the freaks of nature than you are to them.

Your estimation of your own abilities is probably higher than it actually is. Build a margin of safety in. Deduct plenty of points from your initial knee jerk estimation.

As an investor and a musician, I’d book myself in the middle of the mildly able or okay. I’ve worked years to go from barely able to ho hum. But I’m honest.

The path from barely able to really good is lottery odds with immense effort. And barely able to freak of nature is as impossible as men birthing babies. It just ain’t gonna happen, full stop.

You’re either born with the goods or you’re not. It doesn’t matter how much blood, sweat, effort and time you put in.

There is a chance to go from okay to good with truck loads of disciplined effort. You have to pick the right path for you. A path where the deposits of talent and the happiness quotient makes the endless hours of work a welcome breeze. Everything else should be a chore.

You might think pursing investing, or fill in the blank, is optimal for you. But with new knowledge and experience you might find an opportunistically better path. That path, for you, will be frictionless while it is boulders up a hill for everyone else.

It’d be damn stupid to trudge the latter path when you are a closer to a freak of nature in another.

You might find, like I have, that as you transition to new paths, what you learned before can be an edge. Those experiences, traits or combination of traits could allow you to outcompete others in the new path. It’s biology. Become an invasive species.

Lake trout are native to the five Great Lakes, New England and Canada. Few made their way to Yellow Stone Lake in 1994. The native Cutthroat trout has been decimated because the larger, efficient Lake trout outcompete & prey on the smaller native trout.

To become an invasive species, all you have to do is change your path, nothing else. I mean the Lake trout did nothing but get moved to a new place by humans.

Nor did anything change when I began operating a real estate photography business. It was the mere act of finding a more aligned niche, with suboptimal competition, that unlocked my potential.

Whatever path you choose, whether you stay where you are or migrate, you need one more thing. You need style.

Style is a blend of a few things: experience, personality & what you excel at.

There will be certain mediums, processes, techniques, and approaches that come naturally to you and things that may not come as easily but you have a strong enough interest in to practice and master. Your style will eventually be a culmination of those things.

Be forewarned. As Arnold Schwarzenegger once said:

You just can’t copy someone else’s routine, because everyone’s body is different. Everyone has different proportions of torso and limb and different hereditary advantages and disadvantages. You can take an idea from another athlete, but you have to understand that your body may respond very differently from his or hers. Experimenting like this helped us find ways to fix particular weaknesses.”

Imagine yourself making a great huge pot of gumbo. Including only one or two ingredients doesn’t make for a tasty meal. So don’t just internalize one or two heroes. If you do, not only will you sound too much like them, you’ll likely pick up their shared flaws.

The wider and more numerous your influences, the better. You’ll have a better sample of quality “ingredients” to internalize and draw from. You’ll cover many of the common flaws found in one group with the appropriate habits of another.

From this huge pot of influences you’ll be able to take a scoop and get the best version of yourself. This will be your style. It will be truly unique. And, quite possibly, help you reach your fullest potential.

It just takes time and honesty to find your style.

Style is a requirement to reach the top. Every top performer in any field has their own unique style. Their styles are so memorable that most people can pick their work out from a group blindfolded. I mean it isn’t difficult at all, at least for most Americans, to pick Michael Jackson’s singing out from a group of other singers.

Style is your brand, your hallmark, the thing that separates you from the rest.

So where do you lie on the bell curve of talent in your field? Be brutally honest.

Do you really think you can take on the Brian Scalabrine’s of the world who are closer to the LeBron’s than you are to them?

And how is that style coming along?