I recently learned how to tell the difference between a Cuban cigar and a fake.

When I heard it, I laughed because it is the same way to tell a great company from a not so good one.

Here’s a writeup you won’t forget.

It doesn’t matter if you smoke cigars or not. Most people have some inkling that Cuban cigars are the Rolls Royce of cigars.

If you didn’t know, now you know.

Why are Cuban cigars the best?

Cuba has the best climate.

They have the best soil.

But that is not all.

Cubans have the culture & tradition, generations of people who are passionate about rolling cigars, and who are always fanatically looking for ways to make the cigar ever more perfect.

Adding to the mystique, Cuban cigars are illegal to be sold in the US. This is due to the strict trade embargo to ban all imports of products containing Cuban goods.

Here is the trick to spot a Cuban cigar in seconds.

Open up the box and smell them.

I know that sounds weird, but that’s how they smell.

I don’t smoke, but I hear they taste delicious. But when you open up the box and inhale, someone who doesn’t know about cigars could easily be turned off by the “shitty” scent.

A great business is often the same.

They have the best conditions architected by a great leader. And like Cubans, the great company has the culture & tradition, micro generations of people who are passionate about the product/service, and who are always fanatically looking for ways to make their business ever more perfect.

You can’t always see greatness being made in real time.

But some basic observation suffices. And let me tell you, a genuine, great company is off putting to most investors who know nothing about great businesses. This is ever more present early in the company’s growth cycle, when the crowd has yet to accept the company’s greatness.

Let me explain with a few examples.

In 2004, Costco’s average pay was $17/hr. That was 42% higher than Sam’s Club paid. Stock analyst, Bill Dreher of Deutsche Bank, complained in ‘03 that at Costco “it’s better to be an employee or a customer than a shareholder.”

Clearly Bill Dreher, and much of Wall Street, thought Costco smelled like shit.

Here is how Costco’s stock ($COST) did compared to stingy Walmart ($WMT). 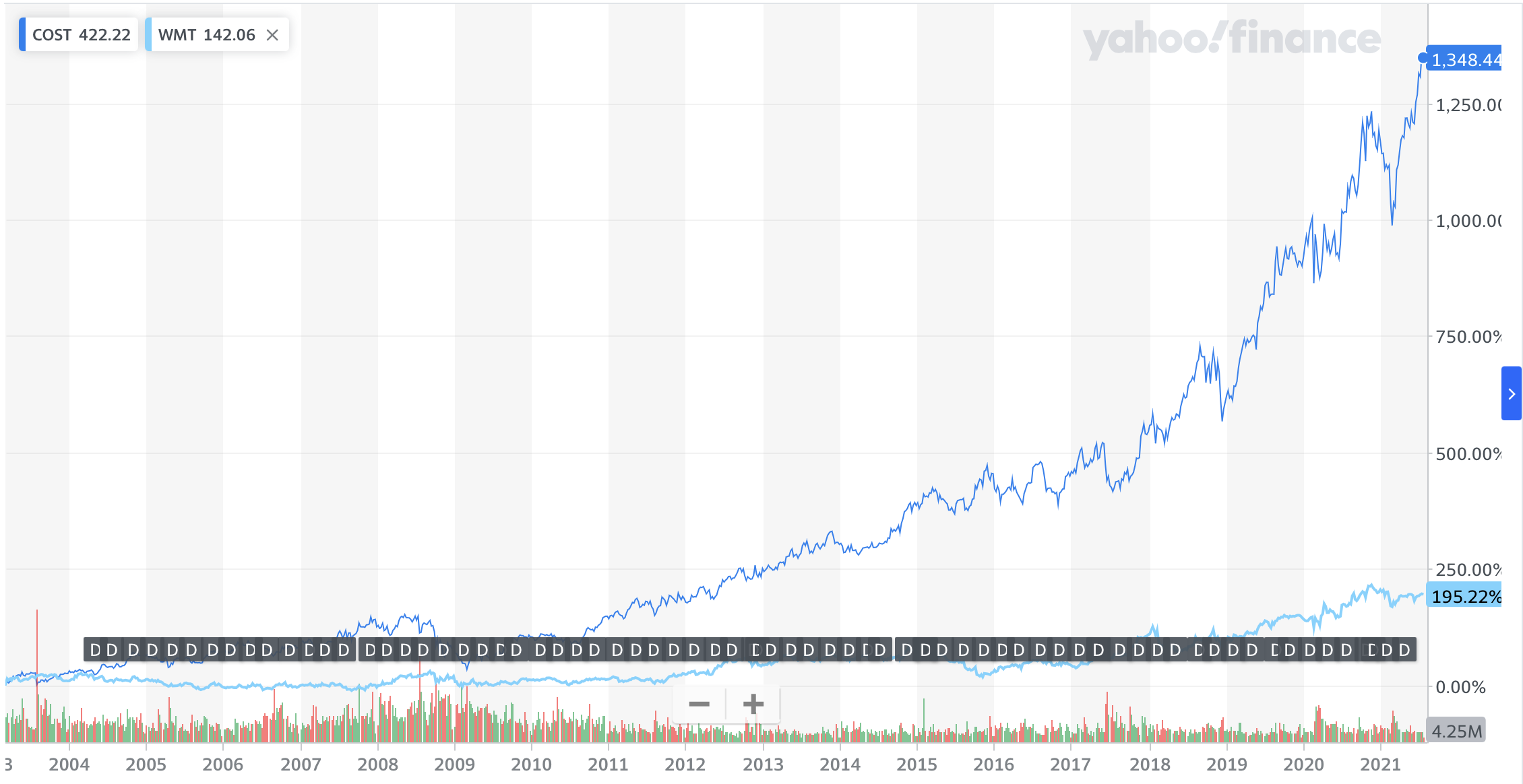 Jim Sinegal, Costco co-founder and former CEO, understood that if you treat the employee well, they’ll treat customers well, and customers will treat shareholders well by coming back.

In March of 1983, Nucor Steel ($NUE) had a meeting with 90 Wall Street analysts. Ken Iverson, Nucor’s CEO, announced a 5% pay raise for the company’s 3,500 production employees. Wages had been frozen the past year and work weeks shortened due to poor business conditions.

Nucor was bucking a trend. Other big steelmakers were reducing workers’ wages 9%.

How did Wall Street analysts respond?

Nucor was already paying higher wages than their unionized peers with the incentive and bonus. A pay raise meant lower shareholder returns, right? 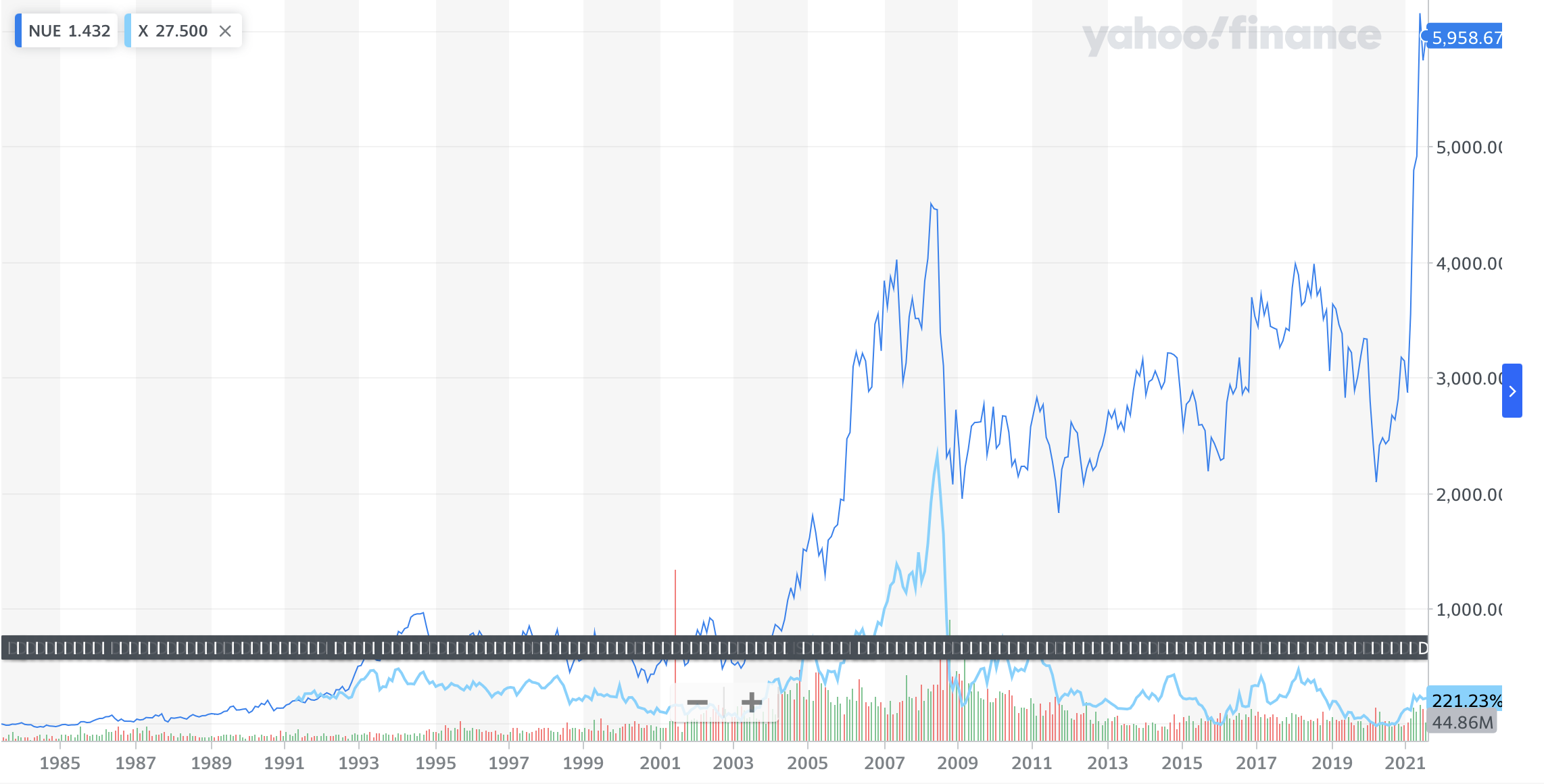 We’re not dogs on a leash, doing tricks to manage the stock price or maximize dividends quarter by quarter. We’re eagles. We soar. If investors want to soar, too, they’ll invest in us. The speculators, we don’t need.”

A friend of mine runs a private defense company.

But that would be stupid, real stupid. The excess inventory allows the company to ship mission critical parts to customers next day, when customers need them the most. Think, without the part, the customer can’t fly and loses obscene amounts of money. Competitors, on the other hand, have month plus lead times. The company can charge whatever to make up for the inventory bloat to meet the desperate situation. So that inventory is a god send to the customer, a simple competitive edge and return generator.

I’ve been told that company has compounded after-tax book value per share at a ~18% CAGR for many, many decades. That is world-class returns.

Most investors are turned off, however. $EXPI gives agents tons of stock incentives, great splits and revenue share.

Like $COST, many investors think it’d be better to be an eXp agent than be an eXp shareholder.

But we should know better. Great companies, like real Cuban cigars, turn off people who don’t know a real from a fake.

That foul “smell” is your indication of culture, micro generations of people who are passionate about the product/service, and who are always fanatically looking for ways to make their business ever more perfect.

Great companies are best bought when they smell the foulest to the investment community as a whole. It is only until much later, when the share price has risen many multiples that investors finally get comfortable with a great company and how their superior operations compete with others.

So next time you come across a cigar or a company, give it a proverbial whiff.