I’ve got a present for all of you. It’s a useful analogy, story and an investment idea.

Ever wish you could see the future?

Yeah, yeah. Seeing the future is impossible. Hindsight is 20/20. The future is unknowable. But I guarantee virtually all of you have successfully done what I am about to describe.

Ever driven or ridden alongside someone in one of these? 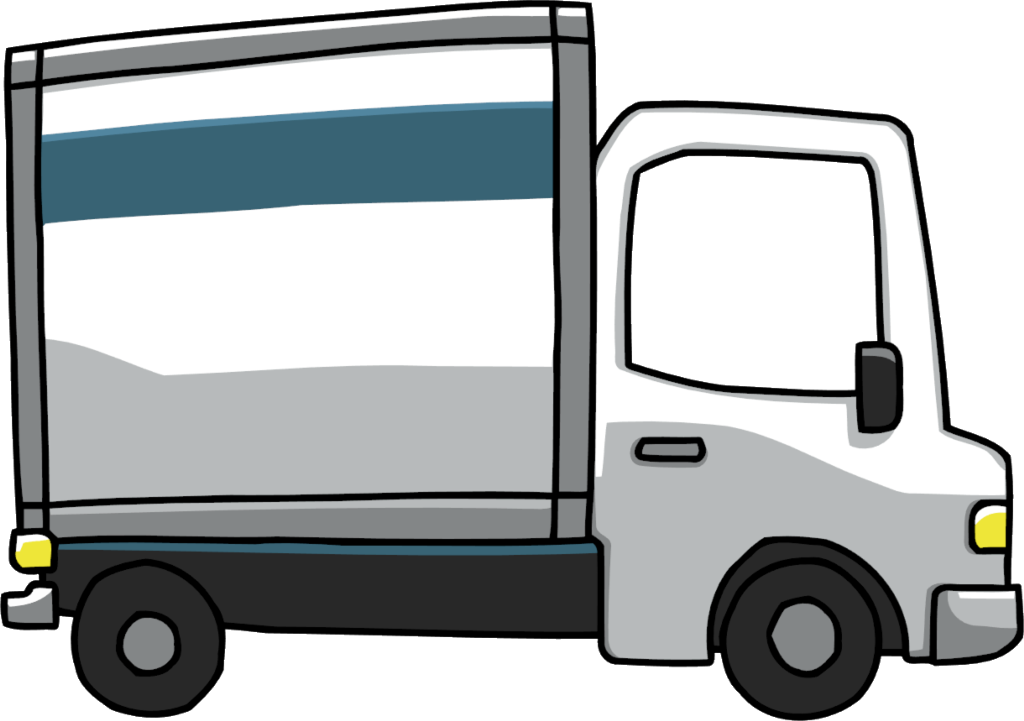 Life is like driving one of those moving trucks stuck in reverse. To move forward, we must go backwards. We permanently face the wrong direction. We see clearly out the front windshield witnessing everything that has happened to us, thus hindsight is 20/20.

It doesn’t matter how hard you try to look ahead. You can’t see where you are going. In the broken moving truck of life, the side mirrors are tiny and filthy, the rear view mirror is nowhere to be found and you can’t see through the storage box behind you.

We can only hope not to crash into the myriad of obstacles that lay ahead, which we are blind to.

Most of us have or witnessed someone reverse these monstrous moving vehicles in difficult spots without accidents. How is it done?

Easy. A helper goes behind the truck. The helper’s view now becomes the driver’s view. The driver’s blindspot is gone. The helper directs the driver. That person makes hand motions, verbal orders and shouts STOP helping the driver safely maneuver the van. Unless the driver or helper is inebriated, it’s practically fool proof.

Why don’t we use helpers like this more often in our lives? Those who are further ahead. Those who’s frontal view - or experience - sees many of the obstacles ahead of us, which we are blind to. Whose advice can safely guide us in the right directions avoiding virtually all pitfalls.

While hindsight is 20/20, other’s hindsight can be your own foresight.

So let my hindsight be your foresight.

From 2008-09 I worked at a retail store in Boston. It was called CEX. The store bought, sold and exchanged games and other technology. I worked in the back at the tiny repair shop.

CEX clientele consisted of college kids, high schoolers, thieves and crack heads. The CEX checkout/barter line always snaked back to our glass display case. While waiting, people would check our cell phone accessories for sale, ask questions or hand off broken electronics to repair. We fixed just about anything, especially the first smartphones.

Back then, few could foresee how life changing the smartphone would be. That included me. I had a plethora of preconceived notions about smartphones, especially the game changer - iPhones.

I had a slide LG phone with a full QWERTY keyboard. It did what I wanted it to do. I thought I’d never want an iPhone or smartphone. I imagined typing on a glass screen being suboptimal. AT&T’s EDGE network, I heard, was terrible. Webpage loads were slow. And coverage in areas was spotty. I couldn’t justify paying $500-$600 price plus $60 a month for a phone. iPhones were a fad, I thought.

When I started the repair gig, I noticed something. Broken iPhone screens were a dime a dozen. It seemed like more and more people were bringing in iPhones. Not that they were poorly made, but they were popular and that people cared about them so much to get them repaired.

I asked customers why they chose the iPhone over the Google G1 or Blackberrys, both with physical keyboards. The answer was always, the iPhone is so much better. To them, typing on a screen was something they got used to. The network wasn’t that bad. All of the other things I, and many others, thought would be a problem, weren’t a problem.

After using an iPhone, I saw what users saw. My preconceived notions were false, ill-informed and ignorant. I learned you can’t form an opinion about something without experiencing it.

My experience, observations and feedback from iPhone owners led me to purchasing 10 Apple shares in late 08. That was pre-split. I invested ~ $930 @ around $3 per share post split. I was poor so that was a decent amount of money. I purchased Apple not because I could foresee the ~3 billion or so iPhones that would be sold over the next 15 years. I’d be lying.

I saw an imbalance of common wisdom vs. reality. People I talked to couldn’t imagine life without it. I soon found my way into that camp too. And penetration rate was low with plenty of tailwinds for growth.***

Here we are 15 years later. I’ve found a similar situation. Virtual Reality is nascent. Around 20 million VR headsets are in use today. That number is growing quickly much like the smartphone was in 2008.

Similarly, people question the value of VR/AR. Those who haven’t used a standalone VR headset with positional tracking with six degrees of freedom (Oculus Quest type) see the device as a toy. Some say it’s a fad. There is a laundry list of reasons against the current iterations of headsets. But like the first 2 iPhones, the first iterations of life-changing technology are far from perfect.

One industry that I think virtual reality is going to wildly change is fitness. Why? Because VR has dramatically changed my exercise routine for the better. I am starting to find it hard to imagine exercising without it.

Recently there has been a lot of chatter about the metaverse.

How will VR change our lives? Let me tell you how it has changed mine.

Just like my story above, fitness virtual reality is rife with preconceived notions:

The list goes on. Those naysayers haven’t tried VR or tried exercising with a stationary bike in apps created by VirZOOM (VZFit or VZPlay) for the Oculus Quest.

None of the above preconceived negatives are a problem.

VZFit solved my problems. There is absolutely no excuse not to exercise now. Weather can’t stop me. I can’t say I’ll get bored - there are 10 million miles of Google Street View to explore and the company is continuously adding new worlds and content.

I believe so much in VZFit and VZPlay that I’ve invested in VirZOOM, the creator. It’s private but is doing crowdfunding.

I’ve spoken with the CEO Eric Janszen and talked to a number of other users. Keep in mind this is a tiny company. VirZoom is unprofitable, has debt and could be a dumpster fire investment.

You can see the company’s financials here. But with any early stage company, recent financials are about as useless as forecasting a baby’s future job prospects based on how many times it cries.

Here are some things I considered:

VirZoom doesn’t need to pay money for interactivity. The VR experience is free. AI and other players aren’t on the payroll.

Variety is key to retention. VirZOOM is piggybacking off of 10 million miles of Google Street View. It is priceless to bike running routes in Boston I haven’t done since college. Costs to create new virtual worlds is nowhere near the cost of producing on-demand content like Peloton pays - which leads to 43% margin on subscriptions. VirZOOM’s margin is 93% and unit economics of subscribers are as follows: 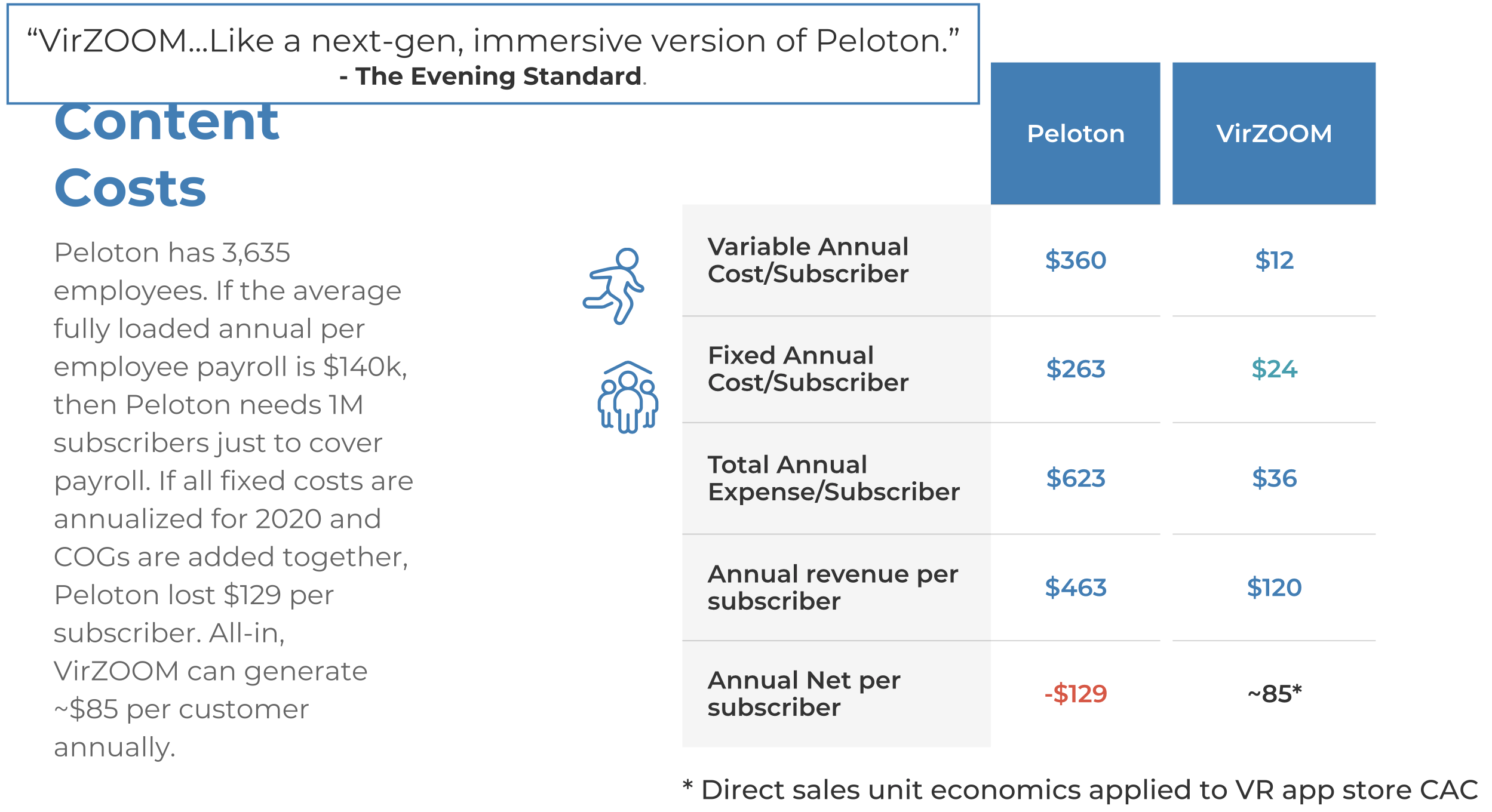 Customer acquisition cost (CAC) is $12 and customer lifetime value (LTV) is now roughly $150. The CAC:LTV ratio is rather high, 1:12.5. That means that $1 cost turns into $12.50 in revenue. Many SaaS businesses say 1:3 is optimal. So VirZoom can increase marketing spend >3x and still be in an optimal zone. Thus, they are raising capital to fuel growth. The key is to grow VirZOOM’s penetration into the growing VR market. If they continue to contain operating expenses, and the above unit economics hold, the company should be cash flow neutral/positive in a year or less. Profitability wouldn’t be far behind.

Cost to the consumer is significantly lower than other connected fitness bike solutions. I paid around $1000 all in for a better bike (Echelon). 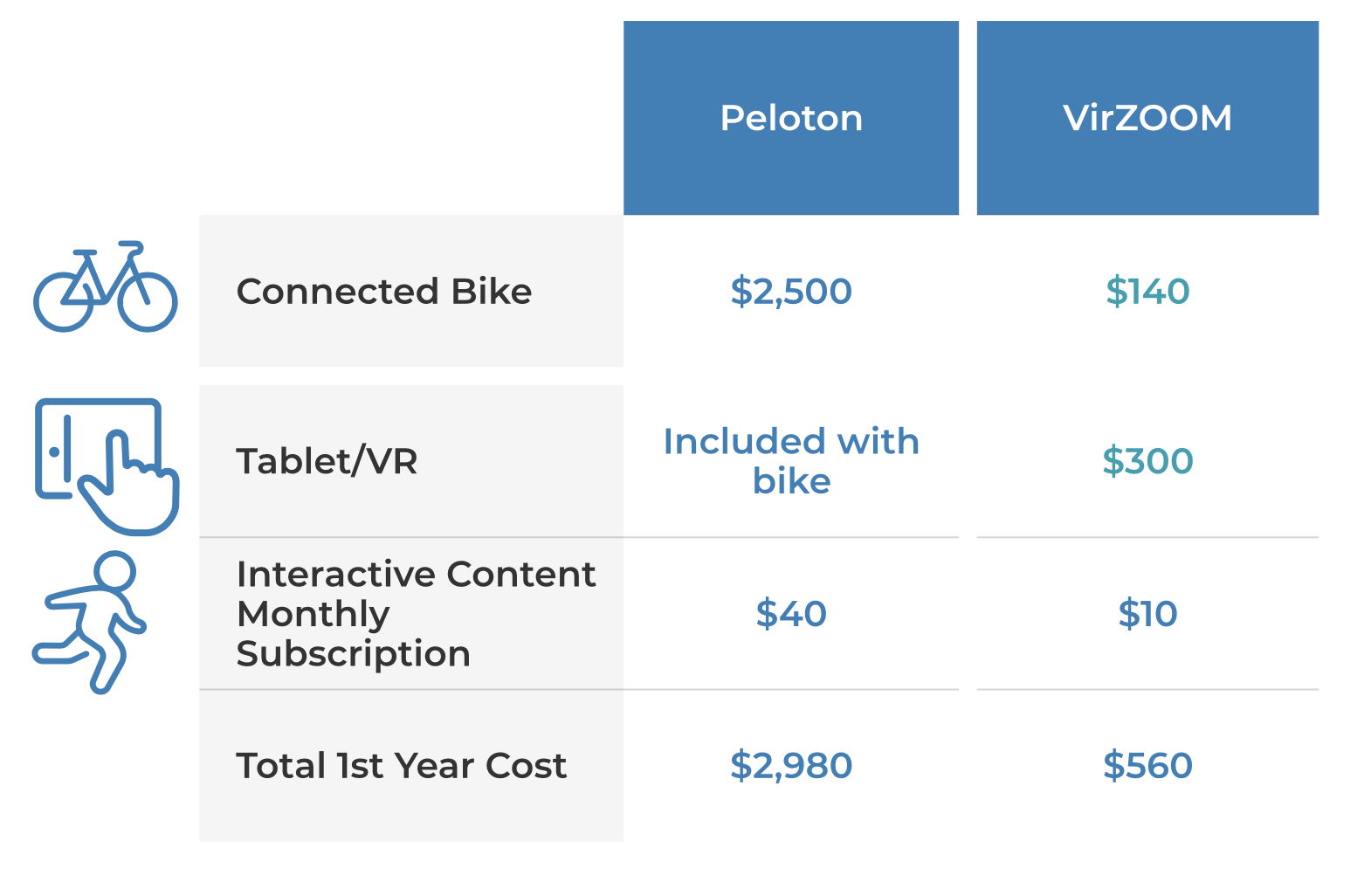 A lower cost leads to a greater TAM. Note, the company isn’t throwing out ridiculous TAMs.

My main interest is VirZOOM’s execution. Those who have a history of adapting/executing tend to execute in the future.

VirZOOM started out with selling a bike and sensor with their apps. This proved to be costly. Gross margins were a paltry 26%. Since hardware sales have been phased out, gross margins are 93%. And before they were on the Oculus Store, VirZOOM had to spend tons of money on acquiring customers. CAC was $33. Since they’ve launched on the Oculus Store, the CAC has decreased to $11-12.

As I’ve said, VirZOOM is constantly upgrading the user experience. Since the recent VZFit release net cash flow is up 32% in the 1st week over the prior. Conversions - going from install to account creation - was 29% and is now 48%. Trial to paid conversion has continuously improved, now >70%.

VirZOOM has been able to get around this by creating a standing mode. A user can stand and squat thrust with hands holding controllers to create forward movement. But the experience is suboptimal compared to the bike. So VirZOOM has not been able to market the true value which is with a bike and sensor to potentials on the Oculus Store. A prospect has to dig further to figure this out.

Why haven’t these guys been bought out yet? It’s too early.

Why is VirZOOM crowdfunding? Why don’t they get VC capital? Good question. I wondered that too. We have to consider the institutional imperative. VCs nowadays are risk averse and tend to mindlessly imitate others. Few deals have been done in the VR space. There aren’t many comps. Plus, VCs are laden with cash. So they need big deals to move the needle of returns. VR is nascent enough where spending a couple billion on a VR company would be highly risky.

For VirZOOM, angel investing has been the way to go. And since the product is B2C (business to consumer), it makes sense. Eric told me, “Who’s in a better position to evaluate the company’s prospects? A customer who’s been using the product and interacting with the team for years or a banker (VC) who just met you and is just looking at the numbers and pattern matching to arbitrarily criteria?” As a happy user turned investor, I am a perfect example. Great companies think of their customers as champions for their success. Because the more the company gives to customers, the more customers will want to do for them.

VR headsets are clunky today, much like the first modern smartphones. There are a lot of perceived downsides. But VirZOOM has solved a few big problems: moving comfortably through huge virtual worlds and exercising in VR. It would be foolish to dismiss VirZOOM and VR without trying it.

I believe Eric and the VirZOOM team will continue to execute. This team will be ahead of competitors as VR/AR headsets improve and adoption explodes. I could see VirZOOM getting acquired a few years out.

This isn’t a call to invest in the company. Do your own due diligence. What I do suggest is trying a VR headset, and if you can, biking in VZFit on a stationary bike with a Bluetooth sensor. I believe you can get a full day pass now for $1.99 in VZFit. The free trial, I believe, gives you full access for 10 minutes.

If you do consider investing, there are plenty of perks. Lifetime memberships are available and a full setup is available if investing >$5k.

And remember the broken moving van of life. While hindsight is 20/20, other’s hindsight can be your own foresight.

***I wasn’t a genius. I sold all my Apple shares in 2012. I left about 10x on the table. And I would be receiving about ~40% of my initial investment back in dividends a year.